The Investment Insights of Charles Ellis, a Financial Legend for 60 Years 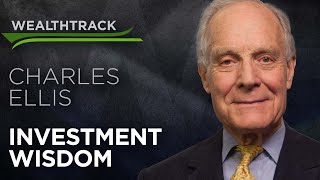 Part 1 of 2
The ancient Greek philosopher Heraclitus said, “There is nothing permanent except change.” Charles Darwin certainly observed that in his trailblazing work on evolution more than 2000 years later. In a quote widely attributed to him, he is alleged to have commented, “It is not the strongest of the species that survive, nor the most intelligent, but the one most adaptive to change.”
As the markets fluctuate around us, how much should investors change?

This week’s guest has his own historical perspective on that question because he has lived through a momentous evolution in the markets. He is Charles Ellis, whose storied career started on Wall Street in 1963 after graduating from the Harvard Business School. He was a skeptical analyst during the go-go years of the 60s and founded Greenwich Associates, the top Wall Street consulting firm to major investment firms, institutions, and governments.

He was an influential board member of Yale’s endowment advising its legendary head, David Swensen. He’s taught advanced investment courses at both Yale and Harvard. And he has authored 20 investment books, including the classic, Winning the Loser’s Game, now in its 8th edition, and the recently published Figuring It Out: Sixty Years of Answering Investors’ Most Important Questions, which we will discuss in this week’s exclusive TV interview.

In the first of a two-part interview, Ellis will discuss the most significant changes that have occurred in the markets and what they mean for investors.