How to Get Rich Without Getting Lucky (Naval Ravikant) 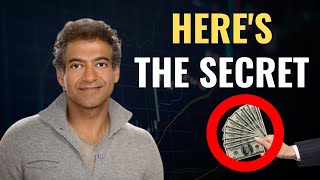 This instruction manual on how to get rich comes in the form of a Twitter thread by highly respected venture capitalist Naval Ravikant. This thread is cleverly titled How To Get Rich Without Getting Lucky. For background, Naval Ravikant is one of the most well known venture capitalists in the world and has become a legend in the tech investing space of Silicon Valley. He was an early investor in Uber and Twitter and has found ed multiple tech companies. As a result, he is incredibly wealthy. Now, normally my videos focus on studying investors that invest in publicly traded stocks such as Warren Buffett and Charlie Munger. However, I felt like I had to make this video because I know the information you are about to learn is honestly going to change the way you think about getting rich. If you are looking for a how to guide on how to get rich, here it is.

Naval Ravikant is an angel investor and Founder of Angel List. His twitter thread titled How to get rich without getting lucky focuses on how someone can build wealth. “Seek wealth, not money or status. Wealth is having assets that earn while you sleep. Money is how we transfer time and wealth. Status is your place in the social hierarchy.” While pretty much everyone says they want to be rich, what they really are after is status. The majority of people are chasing money or status when instead they should be focused on chasing wealth. Think about it. Most people work really hard their whole entire life to get a fancy job with a fancy title. I would say most of them are pursuing the money and status that comes with that job. As their salary grows as they climb the corporate ladder, most people upgrade their lifestyle significantly. New cars, fancy luxury apartments, glamorous vacations during the one week a year they get off from work. Despite making a lot of money, they aren't rich because they are using their money to purchase status instead of assets, the status in society that comes with having a nice car or a penthouse apartment in a big city. This is why 36% of people in America that make over $250,000 a year are still living paycheck to paycheck. Instead, Naval says if you want to get rich you instead have to seek wealth. He defines wealth as having assets that earn while you sleep. These assets are things like real estate, stocks, or businesses that you own. In order to get rich, you have to change your definition of rich. A rich person isn’t someone who has a fancy apartment or drives a sports car. A truly rich person is someone who instead owns assets that produce cash for him while he sleeps. Now, you don’t have to be a multi-millionaire to begin purchasing these types of assets. These assets don't have to be a huge apartment complex or a $100 million company. You can start by purchasing a modestly priced rental property, for example, or a small business such as a laundromat or car wash.